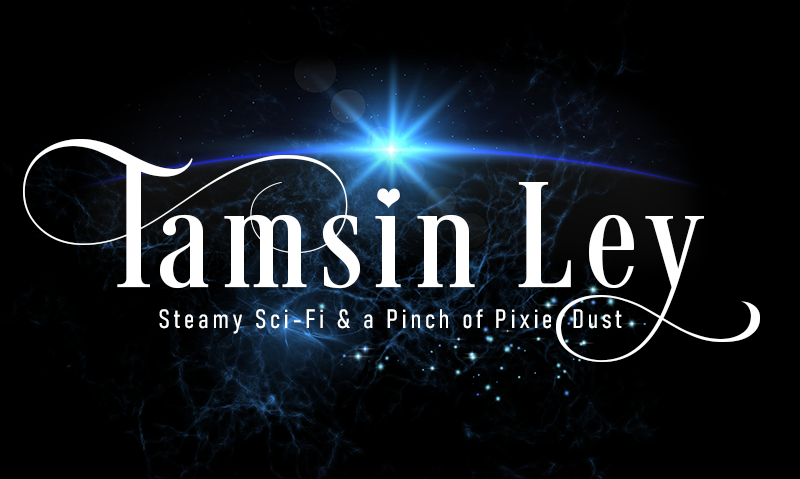 A smuggler running solo
Iroth doesn’t deal in live cargo, but the job on Earth’s too good to pass up—purchase a female, escort her to Kirenai Prime, and rake in the credits. Except it was all a setup. Now he's on the hook for attempting to assassinate the crown prince. To avoid being shot on sight, he’s forced to assume the shape of one of the human’s primitive four-legged pets. But as a mysterious ailment threatens to compromise his disguise, he seeks refuge with a breathtaking female who turns out to be as strong as she is sweet, and his plan to escape goes to the dogs.

A caregiver with nerves of steel
Maise expected to leave the charity auction with a hot date. Instead, she goes home with a wounded Great Dane and a whole lot of questions. When the giant canine transforms into a sultry blue alien with turquoise eyes and asks for her help, she can’t refuse… until she helps him back onto his spaceship, and he won’t let her leave.

She’s determined to find an escape, but the more time they spend together, the more she suspects he’s not the alien monster she imagined. But will her strength and kindness be enough to melt the armor around his heart?

This alien bought a date at a charity auction.

Now he thinks he owns her.

He can't get his mind off the alluring human police officer helping him track down an assassin.

And then the killers come for her…

Georgie flinched as the black lab on her grooming table shook water from his fur. The big oaf was one of the lucky ones headed to the feed store for adoption day, and she’d volunteered to help groom and transport them from the shelter. She wiped her glasses off on her sleeve and finished rinsing the pup, who thanked her with one of his signature slobbery kisses. If she wasn’t living in a tiny one-bedroom apartment with her dad at the moment, she would’ve considered adopting him herself, but there was barely room for the two of them as it was.

In the nearby kennels, a dog started barking, which soon escalated into a chorus. The Jack Russell Terrier Lora was grooming on the next table over started crying, writhing against the leash. The poor baby had anxiety issues, and Lora tried to distract it with a squeaky toy.

“I think you’re stressing her even more, Lora,” said Georgie, making a face at the added noise.

At the third dog washing station, Maise had already finished with an older German Shepherd who now lay placidly at her feet. She owned Yappy Hour, the pet boarding and grooming business they were using to clean up the dogs, and was a pro with the wash station. She leaned against the table, long dark ringlets obscuring her face as she looked at her phone. “What about this one, Georgie? Intergalactic Dating Agency seeks capable human to coordinate first ever alien matchmaking event. All applications considered.”

“You’ve got to be kidding,” said Lora, ceasing her squeaky toy distraction and looking at Georgie. “Aliens?”

Extraterrestrials hadn’t been seen on Earth since a singular appearance over forty years ago—if that was even to be believed. The ships had landed at Beijing Daxing International Airport in China, spoken to government officials there, and departed again before the other nations could even respond. Despite photographs and eyewitness accounts, many people believed the visit had been a hoax—a myth created by governments to justify spending on defense and outlandish space research.

Yet in the years since, people still claimed to have been abducted, including Georgie’s mom. Her mom had died several years ago from a head injury after falling from a ladder, but Georgie’d always wanted to believe her mother’s story.

“Maybe they’re checking in on us,” Georgie said.

“To ask for dates to the movies? How desperate can they be?” Lora snorted. “Keep scrolling, Maise.”

“No, wait. I want to know more,” said Georgie, wiping her hands off on a towel.

If this was an actual, paying gig, she couldn’t dismiss it without at least reading the fine print. She’d been trying to get her event planning business off the ground for months now, but every time she thought she had a lead, someone snagged the contract out from under her. The only people who said yes couldn’t pay her, and one guy who wanted a bar mitzvah for his son had even had the balls to say she should be grateful for the “exposure” planning his son’s event would get her. Asshole.

Problem was, she was desperate enough to consider it. Since her divorce, she’d been living with her dad to save money, sinking all her savings into getting her business off the ground while working part time as a cashier at the grocery store. She had to do something soon, or she was going to go crazy.

“Maybe it’s just a cosplay party or something. Let me see your phone.” She held out her hand.

Maise handed over her cell, and Georgie looked over the advertisement. An alien matchmaking event did sound hokey, but it wouldn’t hurt to ask for more information and submit a proposal. Heck, an alien-themed party could be really fun. She typed in her email address and handed the phone back.

“How cool would it be to plan the first ever party with actual aliens?” asked Maise, pocketing the phone and grabbing a towel to help Georgie with the lab.

“I just want to know how much they’ll pay.” Georgie fixed a collar around the dog’s neck and led him to the floor.

“You couldn’t pay me enough to go on a date with an alien.” Lora scooped the shivering terrier into her arms.

As they headed to the shelter’s van to load the dogs for transport, the breeze coming off the pulp factory made Georgette want to gag. It was particularly bad today. She’d just closed the lab into a kennel and shut the door when her phone pinged with an incoming email. She glanced at it.

“It’s them,” she said, surprised to have a response so quickly, then read the email out loud. “Thank you for your interest in the Intergalactic Dating Agency. Please send proposed Earth time frame, location and cultural requirements.”

“Just staying in character, I guess.” Georgie chuckled. A plan was already forming in her head. “At least I know they want me to keep things weird.”

“What the heck are cultural requirements?” asked Maise.

“I don’t know, but it sounds fun.” Georgie squinted at the fine print at the bottom of the email. It was hard to read, so she expanded the text.

Her jaw dropped. “Holy crap, listen to this! Upon acceptance, the coordinator will be paid ten thousand Earth credits in the monetary unit of their choosing plus expenses upon receipt.”

“Earth credits?” asked Maise as she climbed into the van’s front seat. “What are those?”

“I think they mean I can choose dollars or yen or whatever currency I want.” Georgie bit her lip. “And look, the return email is from a dot gov site.” She let out a slow breath. “I think this really is a solicitation from aliens.”

Lora scrunched one eye doubtfully and moved to the driver’s side. “Highly questionable.”

Questionable or not, Georgie needed the money. “I have an idea. Let’s host a charity auction where aliens—or alien wannabes or whatever—bid on dates, and the proceeds benefit the shelter. The client foots the bill for the party, with food, dancing, and booze. The aliens meet women, and the shelter earns some money. Win-win!”

“But who are you going to auction?” asked Maise, scooting across the bench and buckling into the middle seat.

Georgie gave her a devious smile and climbed in behind her. “People who support the animal shelter, of course.”

Lora shook her head and started the engine. “Count me out. I’m not into green slime.”

“They’re not slimy,” insisted Georgie. “They look sort of human. See?” She did a quick search and found one of the old images that had been all over the news. A slim alien with bluish skin looked into the camera with big eyes.

Lora glanced at the image, then put the van into drive. “He looks like my grandpa.”

Georgie released a heavy sigh. “I’m not asking you to marry one, Lora. Just go out to dinner. Or coffee. Look at it as an opportunity to make new friends.”

“I usually do more than make friends on my dates.” Lora gave her a sardonic look.

“Slut.” Maise elbowed her in the ribs with a smile.

“I’ll run security for you. You might need someone to fend off death rays or something.” Lora was a police officer and always assumed there’d be trouble.

“I can hire security,” Georgie said. “I need women for the auction.”

Lora raised an eyebrow. “Who says they want women?”

“What about you?” asked Maise. “Are you entering?”

“I have to run things.” Georgie was already researching possible venues, caterers, permits…

Lora snorted and turned onto the highway. “Right. The perfect excuse.”

Georgie looked up. “Fine. If I enter the auction, will you agree to do it, too?”

“Can I bring my dogs?” asked Maise. “If it’s a pet event, we should include pets.”

“Great idea,” Georgie said. “We can hold it at Covey Park.”

“Aliens, come run with our animals at the dog park!” Lora called toward the ceiling.

“So you’ll help?” asked Georgie, batting her eyes beseechingly at her friend.

Georgie finished drafting her proposal while they drove. Normally, she would take this home to think about it. But she’d had opportunity snatched out from under her too often.

This time, she was going to be first.

She hit send and set her phone on her lap. Once she had a contract, she’d worry about getting more volunteers for the auction.

To her surprise, her phone buzzed before they’d even reached the feed store. She swallowed, hardly able to believe the response. Your terms are acceptable. Women matches only. Please find your fee in your monetary storage account. Additional funds available upon receipt. Send updates to this address.

Wondering how they’d accessed her bank account, she logged on to find she was now ten thousand dollars richer. “Holy shit,” she breathed. “I just got the contract.”

Georgie showed her the bank balance.

“Wow! That was fast!” Maise grinned and raised her hand for a high five.

Georgie gleefully smacked her palm as reality settled in.

She had an event to plan.

My site provides readers with links that often direct to their favorite storefront for easy purchase. When you click on one of these links and then go on to buy something, I may receive a small commission on qualifying items. Clicking on these links do not cost you, the reader, anything. The commission is paid from the store's margin. Stores included are: Kobo, Apple, Google Play, and Amazon Services LLC Associates Programs.